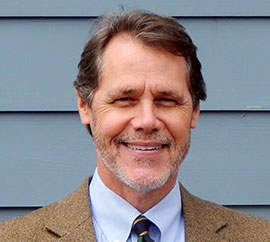 Daniel was hired as President and CEO of Historic Savannah Foundation in December of 2008.  He came to Savannah after serving nearly 18 years in various field positions at the National Trust for Historic Preservation.  He is the immediate past chair of the National Preservation Partners Network and retains a seat on the Board of Directors.

Daniel leads a strong organization in Historic Savannah Foundation with a seasoned staff of 8, a board of 22, a membership of 800, and an annual budget of $1.2 million.  HSF is proud of its outstanding museum—the Davenport House, its nationally recognized Revolving Fund, and its strong advocacy programs.

Daniel Carey walked along Lincoln Street pointing out about a dozen historic homes the Historic Savannah Foundation had helped restore either directly or by finding an owner willing to invest time and money. At the corner of 32nd Street stood the 130-year-old Victorian style home known as the P.J. O’Connor House, which has been restored since the foundation found the right buyer in 2013. A block south on the corner of 33rd Street is one of the foundation’s first Lincoln Street projects – bought, restored and sold about four years before Carey became the foundation’s CEO and president in 2008. Across from the structure, three new single-family homes now stand on what used to be vacant lots. The new homes serve as examples of the impact the foundation’s investment in abandoned communities can have, Carey said.

“We’ve learned about the power of synthesizing our efforts into an area,” he said. “If we can save a handful of properties, that will attract private investors to follow suit.”

The Lincoln Street initiative took place in the Thomas Square Streetcar Historic District, one of the four local Savannah historic districts examined as part of a study the foundation commissioned on the economic impact of preservation. To highlight the benefits preservation brings to residents and businesses, the foundation hired Donovan Rypkema, principal of consulting firm PlaceEconomics, to study the role historic neighborhoods play in Chatham County’s economy and residents’ lives. Historic buildings and communities should be celebrated for more than luring visitors to the Savannah area, Carey said.